This article was originally published on Medium.

Last year we surveyed the Chief of Staff Network to better understand the fair market value of a CoS across the tech industry. The 2019 survey analysis can be found here. The CoS role can be tricky to negotiate salaries, equity, and other benefits given the wide variety of definitions it assumes among small and large companies and various degrees of experience. As Dan Ciampa noted in his HBR article The Case for a Chief of Staff, despite having the same title there are vastly different levels reflecting a Chief of Staff’s responsibilities and engagement with the executive team. It’s understandable that salary ranges would also reflect the variability of the role.

This year we surveyed the community again, receiving 118 responses. The data paints a fairly accurate picture of CoS compensation from seed-stage startups to some of the largest tech companies. We also took the opportunity to pivot the data to more accurately compare salary ranges to age/experience, CoS level, gender, ethnicity, and more. A sample of that data is available here and hopefully is a helpful tool for people looking into the role as a career opportunity and executives hiring for the position. The rest of the data set and analysis are available privately for members of the Chief of Staff Network.

If you’re a CoS and would like to join our community of 300+ other chiefs from around the world — get in touch with us here.

Estimated value of equity or options

Although similar to last year’s data, we see a slight uptick in the median salary. 67% of CoS are making over $120K. Notably, we see a significant increase in the percent of CoS making over $200K. This is likely due to the fact that more senior CoS have joined the community in the past 12 months, so does not necessarily reflect a general salary increase YoY. Equity/options continue to be a major part of the compensation plans for most surveyed Chiefs of Staff in the tech industry, yet 23% are not participating in any option grant schemes and very few have options worth above $200K.

73% of CoS are the first CoS at their organization. This, coupled with the noted higher salaries, demonstrates the importance of a CoS on executive teams and companies’ willingness to pay for top quality operators. We also recorded that 27% of companies have already hired more than one CoS. This demonstrates how quickly the role has become a staple position in the industry.

This chart shows the distribution of salaries against the company size across the entire sample group. Surprisingly, one would have expected the higher salary bands (specifically $200K+) to include more companies over 1K employees. It should be noted, a wider sample including more CoS from the larger fortune 500 companies would likely readjust the results to include those firms in the latter salary bands or higher. Companies with fewer than 50 employees also marked a very wide range of salaries, despite as can be seen on the next chart, hiring a majority of employees from similar experience levels.

In our survey, we used age as a proxy for experience level. The two are not necessarily synonymous, but we believe it is a good representation as some respondents may not count time spent in other fields or additional study as part of their “years of experience”. 78% of respondents were between the ages of 25–34 and 15% between 35–44. While a significant number of 25–34 years olds are working at companies above 500 employees, as the chart below shows 35+ year-olds still tend to land salaries above $180K.

Salary vs. CoS Level (%TTL)

Even more telling than years of professional experience was CoS Level. The chart above reflects the distribution % across each Level. We asked participants to identify what CoS level best describes their position. This is both a reflection of their responsibilities and how the organization thinks about their role and in turn, compensation. Notably, CoS that identified as Level 3 do make up the majority of the three highest salary bands while Levels 1 and 2 tend to make below $160K. 21% of Level 2 CoS are also making above $160K — a signal that CEOs may be willing to pay higher salaries for a Level 2 CoS that has the potential to grow into Level 3 responsibilities.

47% of respondents identified as male, while 53% identified as female. This is on par with the rest of the CoS Community as well and a good signal that both genders are being hired equally for the role. Last year we noted a marked difference between male and female salaries, with men earning more despite having on average fewer years of experience. The chart above does show some improvement here with men and women reporting earnings above $180K equally (~22% per gender) and 45% each reporting salaries between $120K-$179K.

A further breakdown of gender, professional experience, and salaries is available privately for members of the Chief of Staff Network.

Another interesting difference between gender pay amounts is the perception of pay vs. market rate. Notably, more women identified having above-market salaries starting over $120K. Even more so, 60% identified $200K+ salaries above the market average, while only 43% of men said the same. 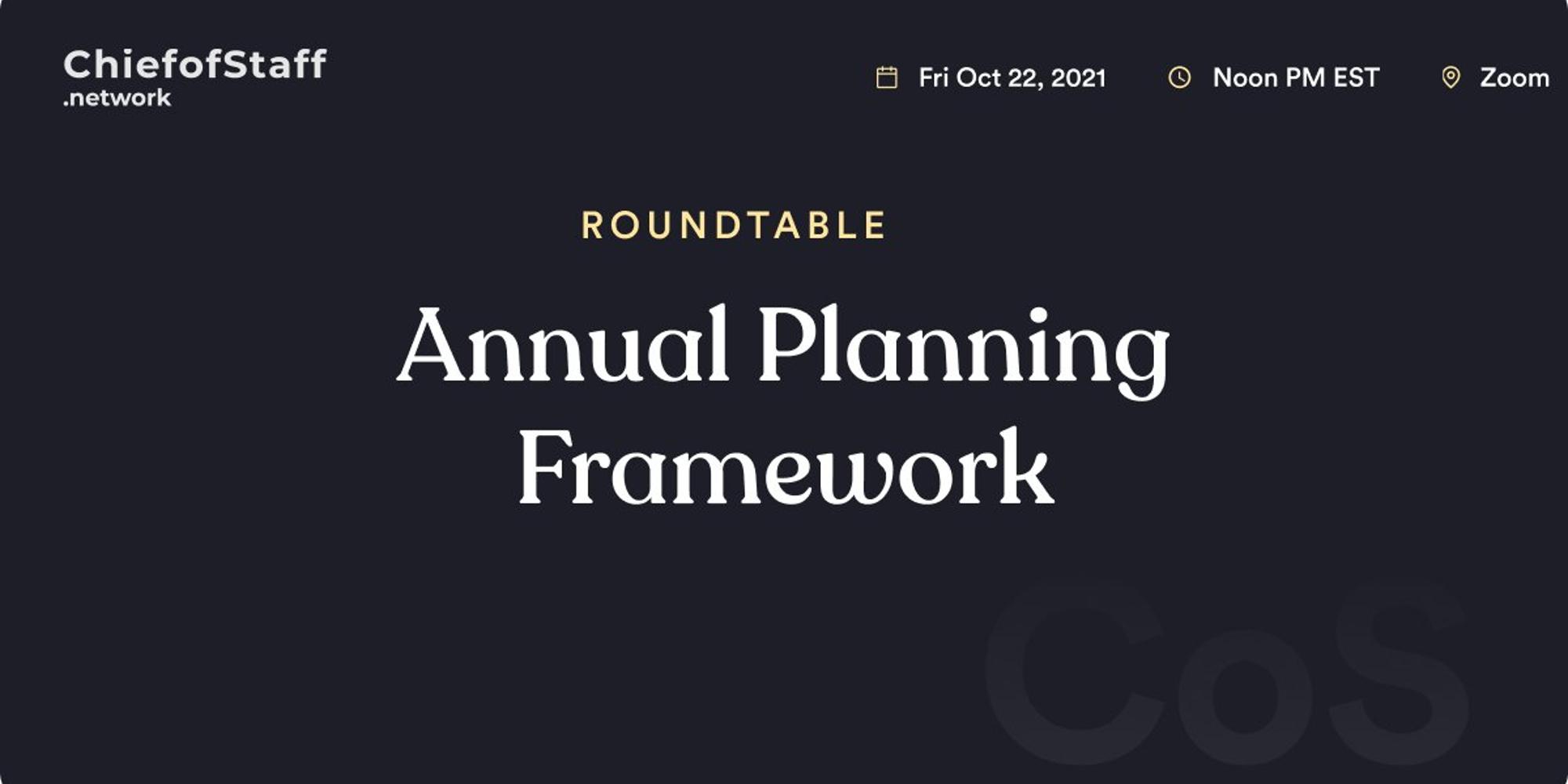 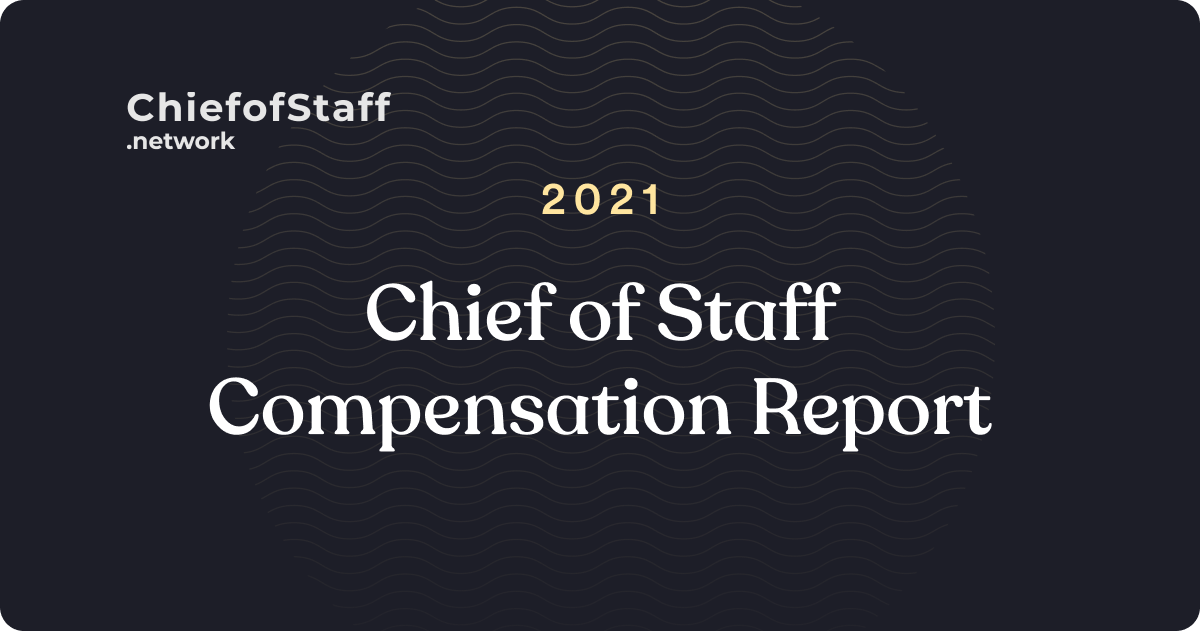 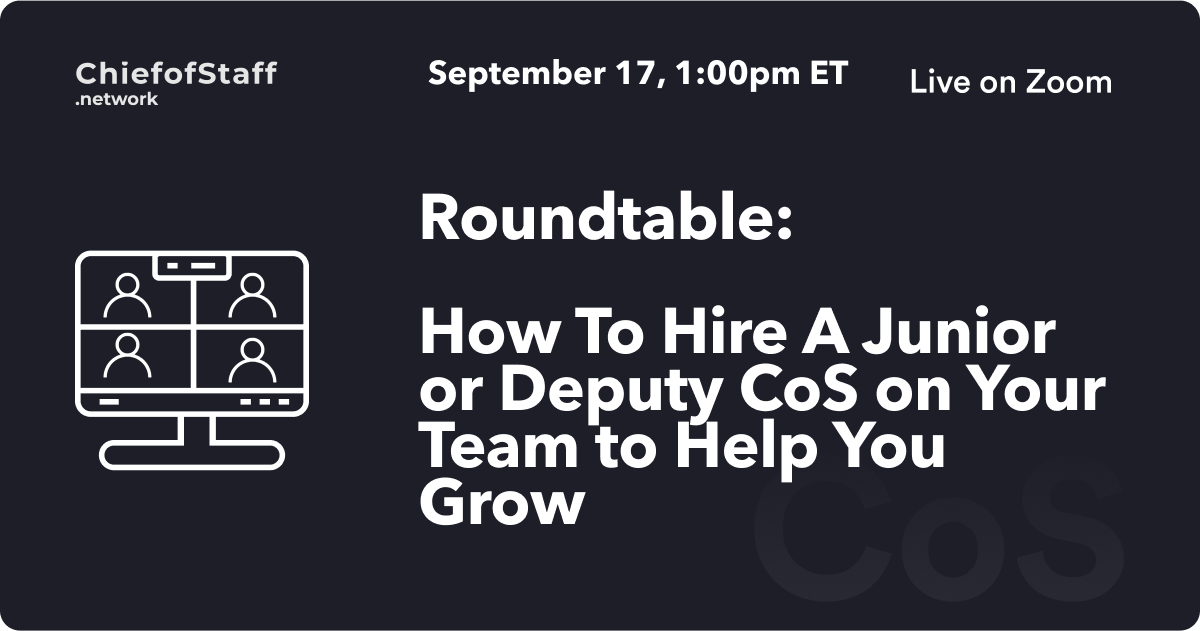