🎉 Announcing the Global Operators Summit for you today! Get Your Ticket Today!

If you’re looking for the model example of a CoS that demonstrates pure selflessness in the role and embraces the learning opportunities that come with a generalist function, look no further than Sara Zabukovec, Chief of Staff at A Cloud Guru!

In this spotlight Sara shared a few of the lessons she learned along the way – from building & scaling companies, prioritizing clear strategies & the processes to back it up, to thinking about how these new skills apply in the larger context of her career.

One thing that really stood out to me in this interview was Sara’s continued acknowledgement of the role in service to her CEO and team. She considers her career path and new skillsets as opportunities to also improve the functions she works alongside. Sara derives energy from seeing the people around her equally succeed - a very notable trait for a world-class CoS.

Read the full interview with Sara —

How did you get into your CoS role at A Cloud Guru?

I joined ACG to build their People & Culture team when they were 25 employees strong three and a half years ago (we now have 530 employees!).

I fell into being our Founder/CEO’s quasi-Chief of Staff from early on, taking on more than what a P&C leader usually might do. I helped with special projects to support our startup’s longer-term strategy and success and became a trusted counsellor to him in the process.

When we doubled in size overnight after acquiring our biggest competitor, he asked me to step up formally into the Chief of Staff role to help him lead our new combined company. It’s been awesome to have a front-row seat as we’ve continued to grow, and I’ve loved being in the Chief of Staff position.

I’m in an interesting position right now as we just announced that we’re being acquired, but the deal hasn’t closed yet! Right now, my role is about 80% internal comms, focusing on keeping our employees engaged and focused on delivering on our H1 priorities. It’s a time of uncertainty for our teams, but it’s also exciting as we prepare to bring our companies together!

These are probably obvious to everyone, but the key things I learnt are:

‍What have been the most challenging and rewarding parts of your CoS experience?

I found the lack of recognition tough at first. Having been in a role where I was front and centre of a department, receiving validation and feedback from our leaders and employees, to going into a role where 90% of the company didn’t see what I was doing was hard! But, I learnt techniques to manage this and get comfortable leading from the shadows.

Seeing the impact my role has had on our Founder/CEO has been really rewarding. I feel like I’ve helped him be a bit like a superhero for our employees and our investors. I’ve been able to increase his bandwidth, allowing him to spend his time on the things that have transformed A Cloud Guru without him needing to make trade-offs that could have negatively impacted our operations or our culture.

I love being the right-hand person to a great Founder -- I find this dynamic really rewarding. I love the multidisciplinary nature of the Chief of Staff role, and I see myself doing this again within another startup or scaleup. Longer-term, I see myself moving into a COO role where I can use my operational skills to their full potential.

I would only use one wish -- I’d love to take everything I’ve learnt in the past three and a half years and do it all over again!

Professionally, I’m actively working on my ability to ask more effective questions. This skill is critical as you move into more and more senior roles, and it’s a muscle worth continuing to build. On the personal side, I’m about to start bass guitar lessons, which I’m excited about.

Hahaha, mine is not work-related, but people are usually very surprised when they find out that I used to deadlift very heavy things — including other humans! I can’t say that it’s helped me directly in my role, but it’s been helpful to reflect and lean on what I learned about myself through powerlifting during moments of self-doubt or adversity in my CoS role.

Your career should be a jungle gym and not a ladder. One of the best managers I’ve had told me this, and I’m so grateful to her for sharing this gem with me -- I’ve looked at my career in a very different way ever since. Although I keep a high-level goal for what I want to achieve overall in mind, I’ve taken upward and sideways moves -- I even took a step back in my career to land a role within a VC -- and it’s paid dividends. It’s expanded my experiences and networks, and most importantly, it’s created opportunities that I could never have imagined if I hadn’t opened myself up to this way of thinking.

Given my situation, I’m eager to learn from others whose companies have been acquired by a competitor or a much larger entity. I’m curious to learn how the role changed for them and their lessons from their experience. I’d like to pay it forward, so if I can be helpful with some of the things I’ve learned over the years, I’d love to assist! 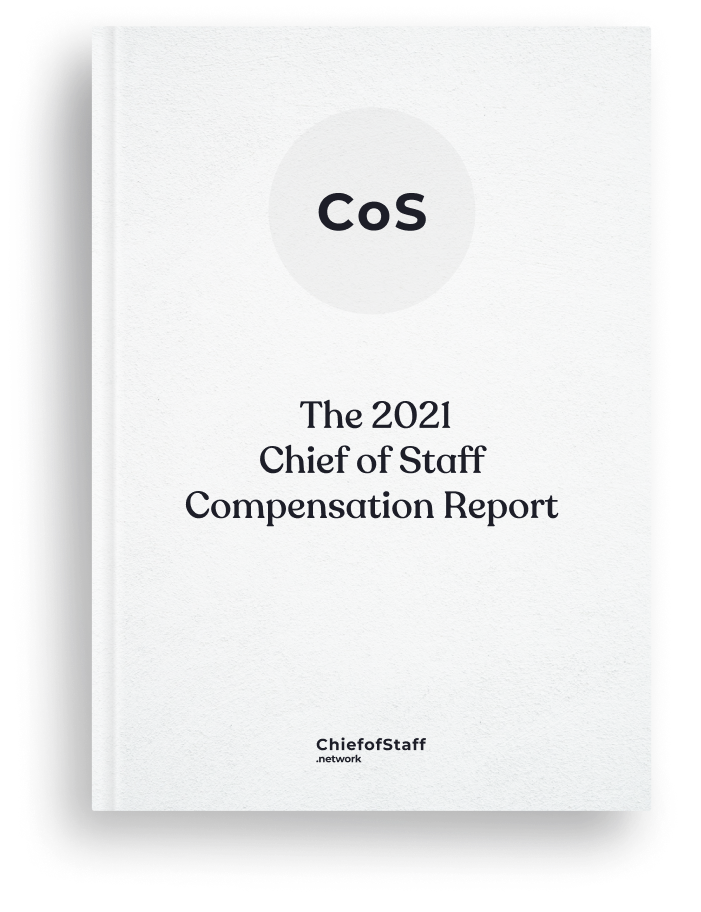 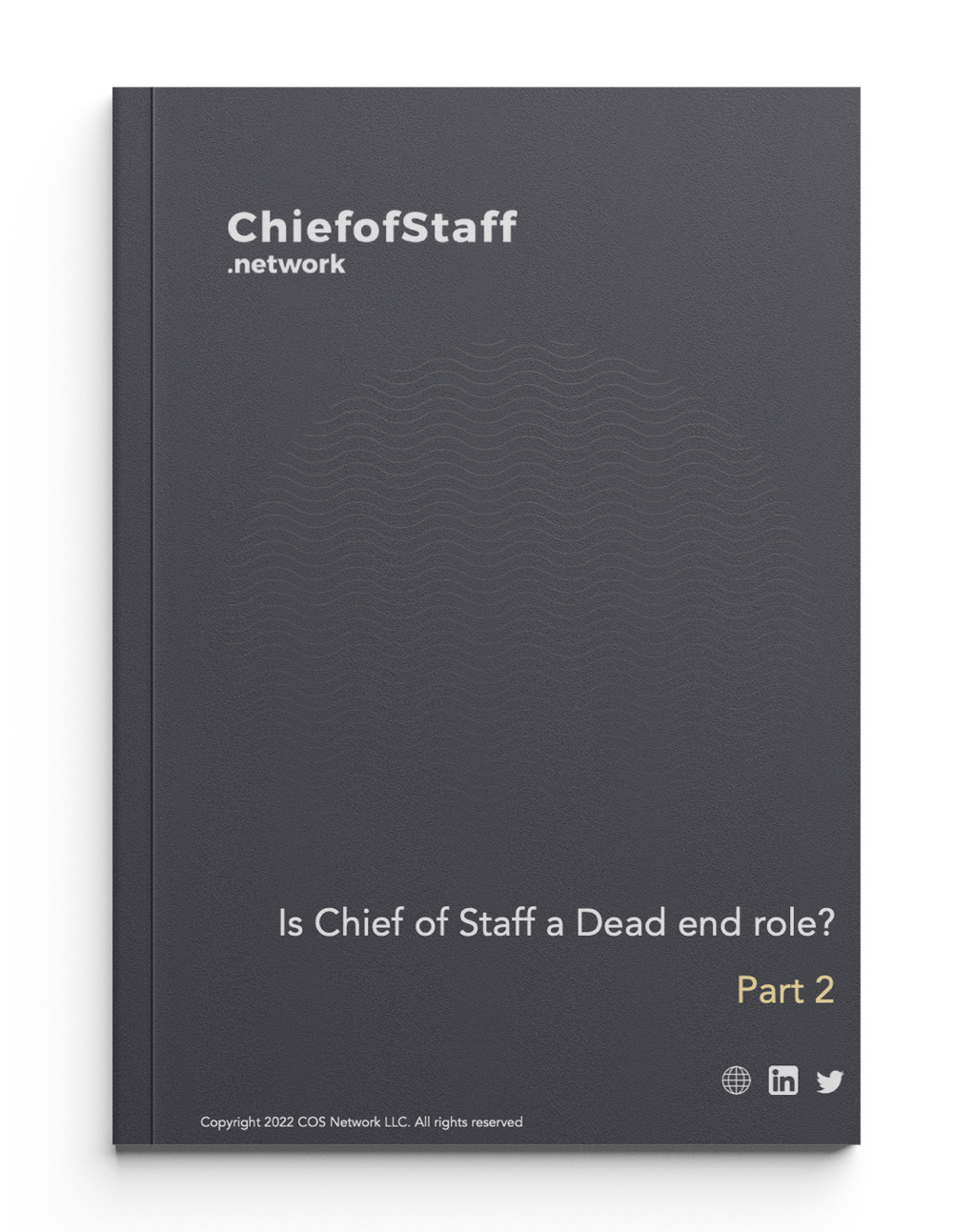 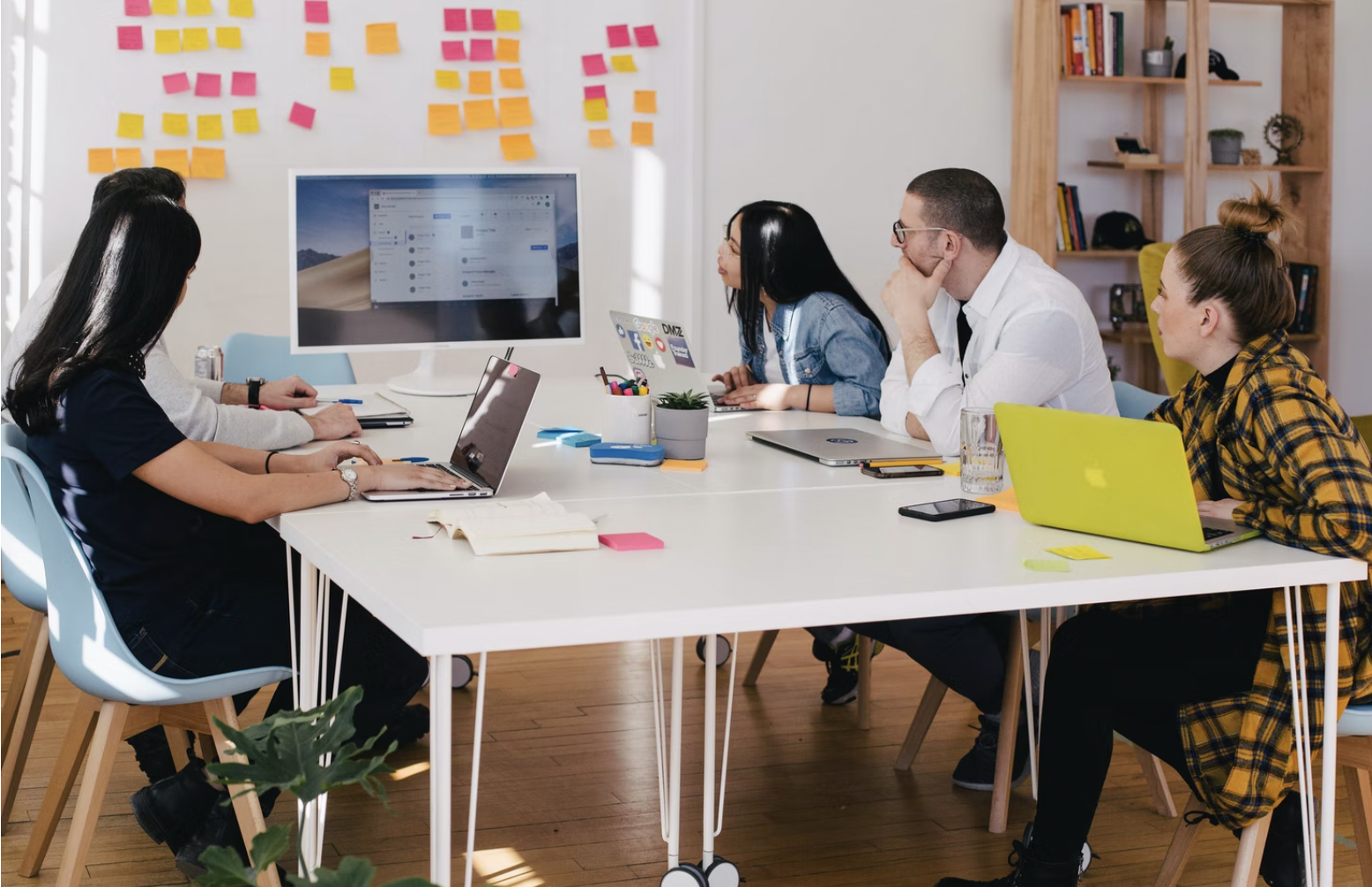 The First 90 Days as a Chief of Staff 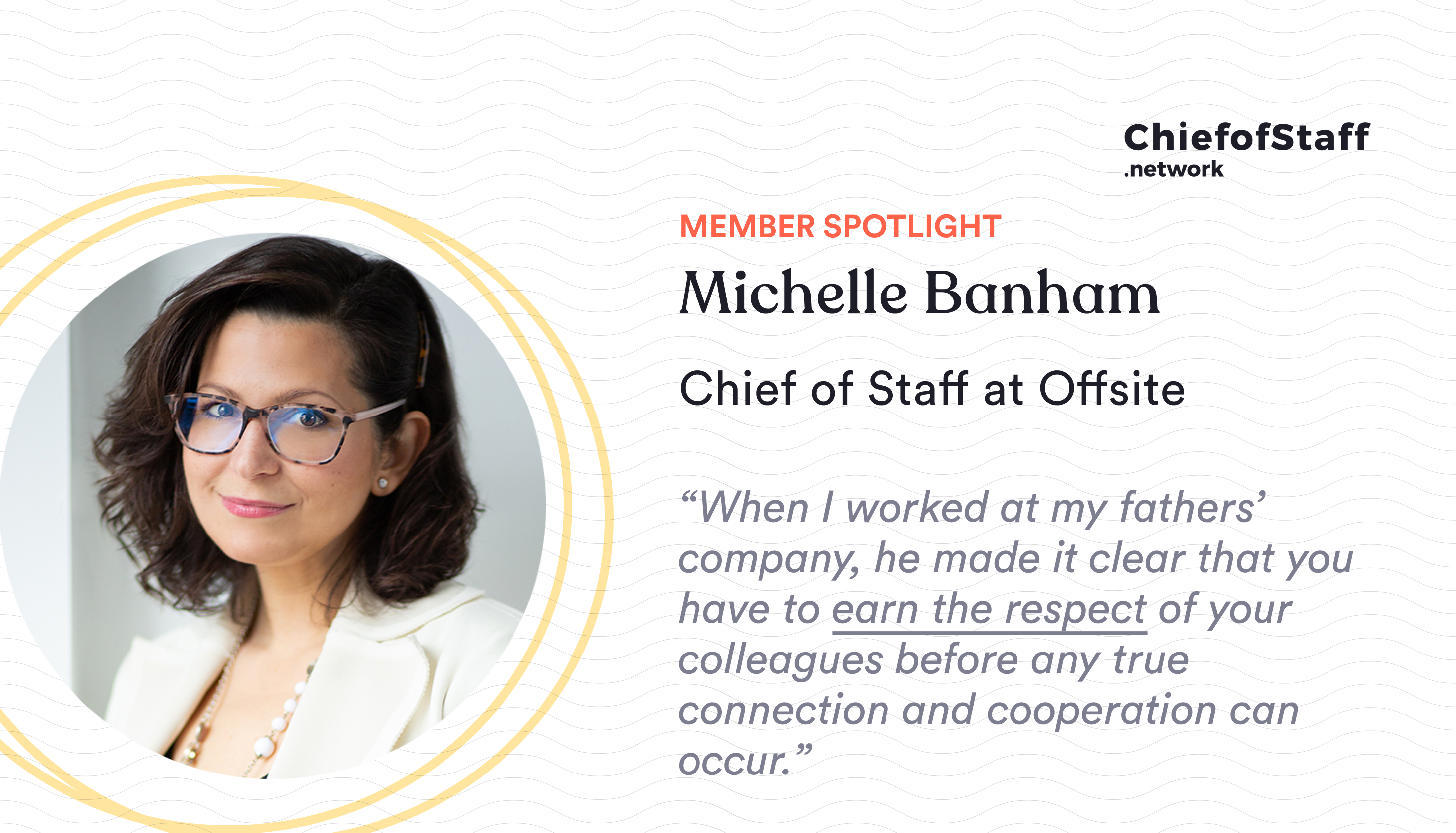 Is Chief of Staff a Dead End Role? Pt 2 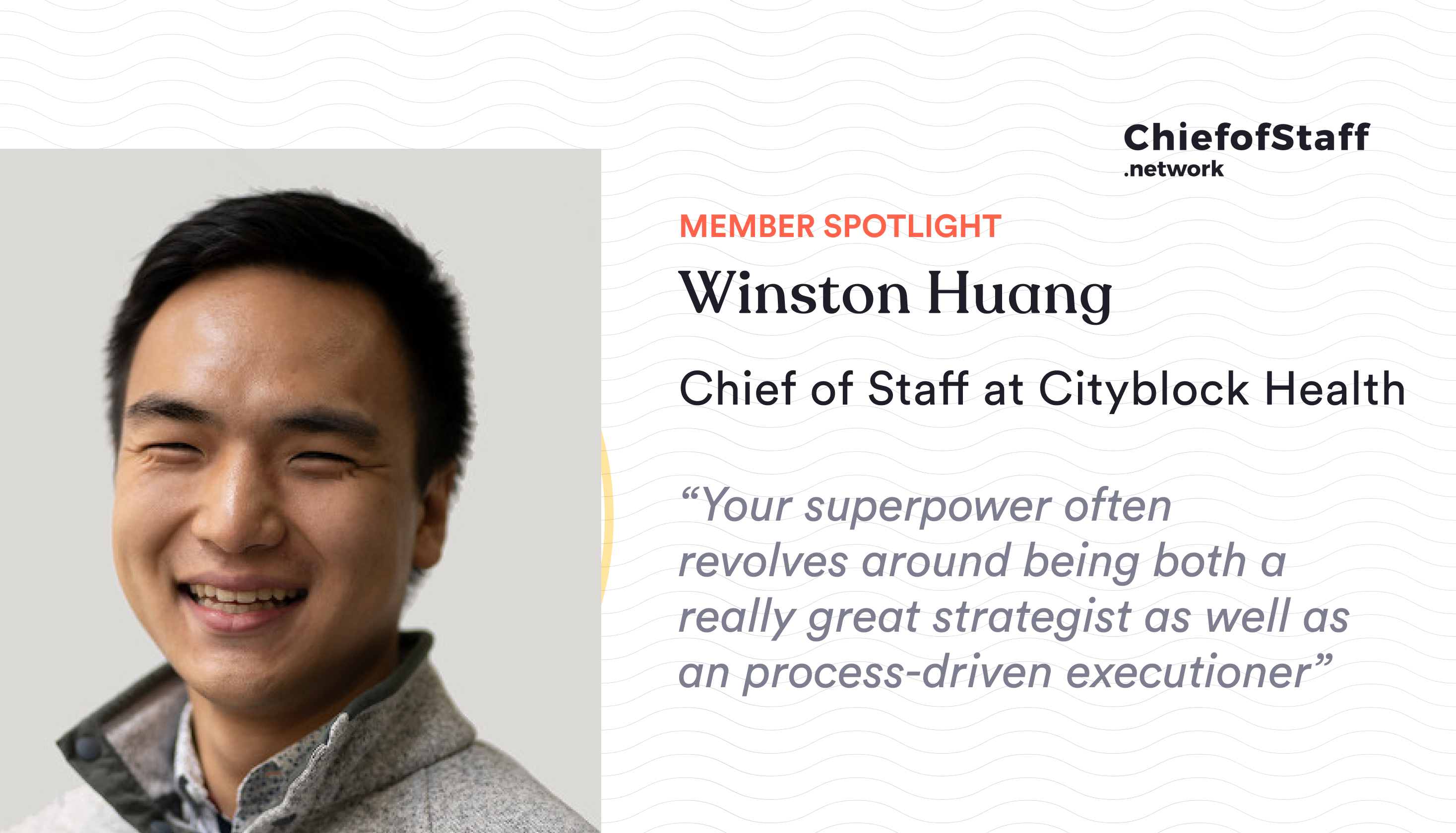 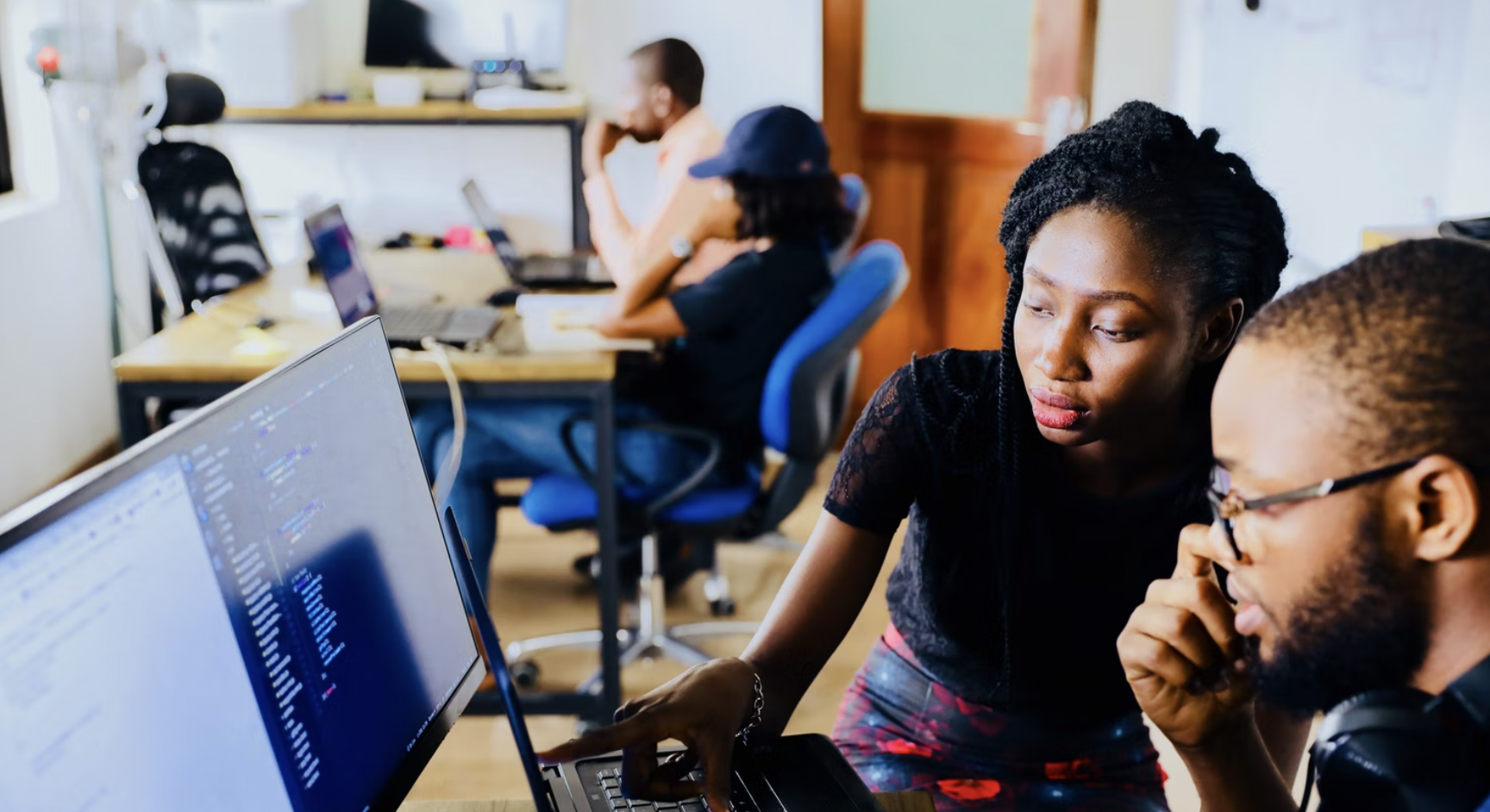 How Can You Advance Your Career from the CoS Role? 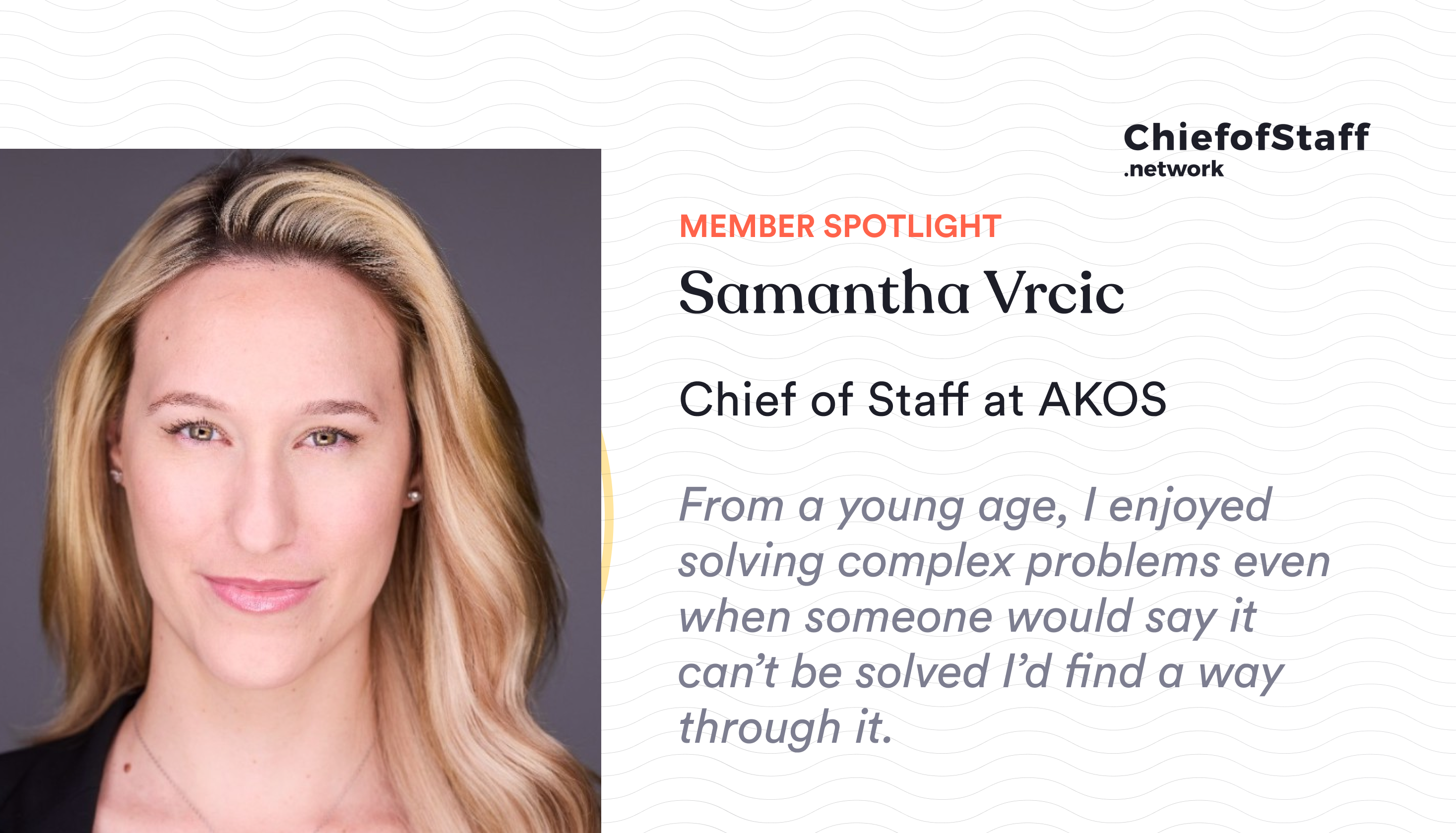